Skip to content
Your browser does not support JavaScript, or it is disabled．Please check the site policy for more information.
The Asahi Shimbun
Opinion
Vox Populi
article
Vox Populi, Vox Dei is a daily column that runs on Page 1 of The Asahi Shimbun.
September 15, 2022 at 12:27 JST 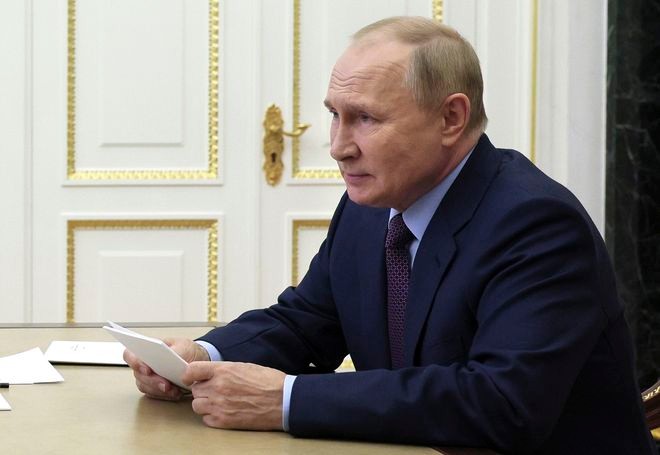 Russian President Vladimir Putin chairs a meeting on economic issues via a teleconference call in Moscow on Sept. 12. (Sputnik, Kremlin Pool Photo via AP)
In Russia, or in any country for that matter, the words and actions of municipal assembly members rarely make international news.
But a short message, signed by dozens of municipal lawmakers from districts in Moscow, St. Petersburg and other regions, immediately reached the world.
“We, the municipal deputies of Russia, believe that the actions of its president, Vladimir Putin, are detrimental to Russia’s and its citizens’ future. We demand Vladimir Putin’s resignation from the post of the president of the Russian Federation,” the signatories stated.
The message openly holds Putin accountable for the invasion of Ukraine. It must have taken the lawmakers a lot of courage to issue it.
So long as their action can be kept at the municipal level, it will probably be nothing more than a minor annoyance for Putin, like a mosquito bite.
On the battlefield, however, Russian retreats have become noticeable, which is said to be inviting popular discontent with Putin.
Russia’s actions–such as arbitrarily invading Ukraine, committing atrocities in combat zones and suppressing speech at home–are all reminiscent of how Imperial Japan behaved in the past.
And even in wartime Japan, people were growing war weary.
According to the book “Boku no Showa-shi” (My history of the Showa Era), by Shotaro Yasuoka (1920-2013), a bill posted under the railway tracks in central Tokyo read, “Beiki wo utsunara eiki mo ute.”
This translates as, “If you’re shooting down a U.S. plane, shoot down an English plane, too.” However, Prime Minister Hideki Tojo’s first name, Hideki, is written with the same kanji as “eiki” (English plane). Using this pun, the message was obviously meant as a criticism of Tojo.
But in the Japan of that era, war-weariness did not evolve into any anti-war movement powerful enough to shake the regime.
How about present-day Russia? Will we have to wait until the 2024 presidential election? Will there be any chance at all of Putin mending his ways before the election?
One of the municipal lawmakers who signed the message told a U.S. daily newspaper that pressure must be applied from every possible point.
What is nothing more than a small pressure point now will eventually become a plane of pressure. When will that day be?
–The Asahi Shimbun, Sept. 15
* * *
Vox Populi, Vox Dei is a popular daily column that takes up a wide range of topics, including culture, arts and social trends and developments. Written by veteran Asahi Shimbun writers, the column provides useful perspectives on and insights into contemporary Japan and its culture.
VOX POPULI: Given the global food situation, it’s time to cheer again for rice
VOX POPULI: Okinawans have spoken again, but Tokyo will still ignore them
VOX POPULI: Waning 16-day-old moon offers its own unique, soothing beauty
VOX POPULI: Long may you reign, King Charles III as the world mourns
VOX POPULI: Planning trip for trade minister? Refer to the user manual
VOX POPULI: Upcoming state funeral for Abe starting to feel like déjà vu

Visit this page for the latest news on Japan’s battle with the novel coronavirus pandemic.

Cooking experts, chefs and others involved in the field of food introduce their special recipes intertwined with their paths in life.

The Asahi Shimbun aims “to achieve gender equality and empower all women and girls” through its Gender Equality Declaration.

Let’s explore the Japanese capital from the viewpoint of wheelchair users and people with disabilities with Barry Joshua Grisdale.
In-house News and Messages
BACK TO TOP
Copyright © The Asahi Shimbun Company. All rights reserved. No reproduction or republication without written permission.